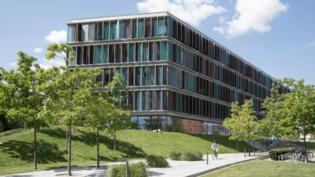 The conference will take place at the Kilen campus building of CBS, Kilevej 14 A/B, centrally located in Frederiksberg just next to Fasanvej metro station.

The Kilen campus building was built in 2005 and is named after its characteristic wedge-shaped design. When the Royal Institute of British Architects awarded the building they emphasized the large and bright atrium along with the prominent shutters on the building’s façade.

The easiest way to get to Kilen campus, from anywhere in the Copenhagen area, is by taking the Metro. Travelling from the airport you get on the Metro bound for Vanløse and get off at the station ‘Fasanvej’. You will find the campus building next to the station. Remember to buy a ticket before boarding the train. Tickets are available from the DSB ticket office above the railway station in Terminal 3 and at ticket machines at the metro platform

Find your way to the Kilen